Last week I had the opportunity to attend Campus Days 2014 in Copenhagen. A Microsoft hosted conference. In this post I’ll give my feedback on the conference and, in particular, the content.

It was my first Campus Days conference, since Campus Days until this year had been focusing more on the DevOps/IT Pro facets. It now turns out that Danish Developer Conference has merged with Campus Days. This makes the conference a much better choice for developers.

Since august I had been in contact with one of the organizers, Technical Evangelist Anders Lybecker, whether I should be giving a talk on scriptcs. Unfortunately, I didn’t make the cut, but was giving a user group talk at CNUG on Tuesday night instead. 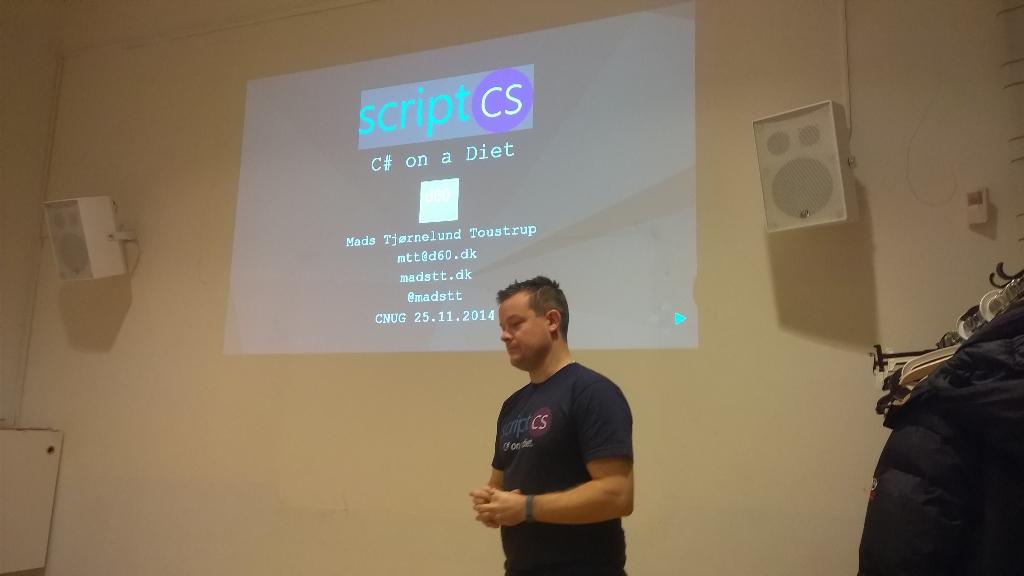 Campus Days 2014 had 11 tracks(!), but in essence there two-three tracks that would be relevant for .Net developers. These tracks were App Development, Microsoft Azure & Web Development, and Visual Studio & Team Foundation Server. So in these three tracks I found my sessions.

Mary Jo Foley from ZDNet gave an inspiring keynote on how she saw Microsoft in the past, today, and tomorrow. This was not the usual keynote, which gave a sort meh-feeling afterwards. With over 900 attendees, a large venue and Microsoft as host, I would expect them to be able to attract a larger speaker name.

I started out at session called Introduction to Project Roslyn with Henrik Lykke Nielsen. I think this was my third introduction to Roslyn, and none, this one included, has given me the everyday tool that I was promised. What I really mean by this is, that since I heard about Roslyn back i 2011, I was told that this would revolutionize the .Net developer’s toolbox. I still miss this point. Henrik gave a good baseline introduction to Roslyn, and then, like the other ‘introduction to’ sessions I’ve attended, showed of how to make analysis and diagnostic tools for Visual Studio. This is a great feature, no doubt, but who would argue that this is a feature that the everyday .Net developer would use? I might not be too objective, but I think that what scriptcs does is were I see power of Roslyn unleashed – powerful and instant compilation of C# code. 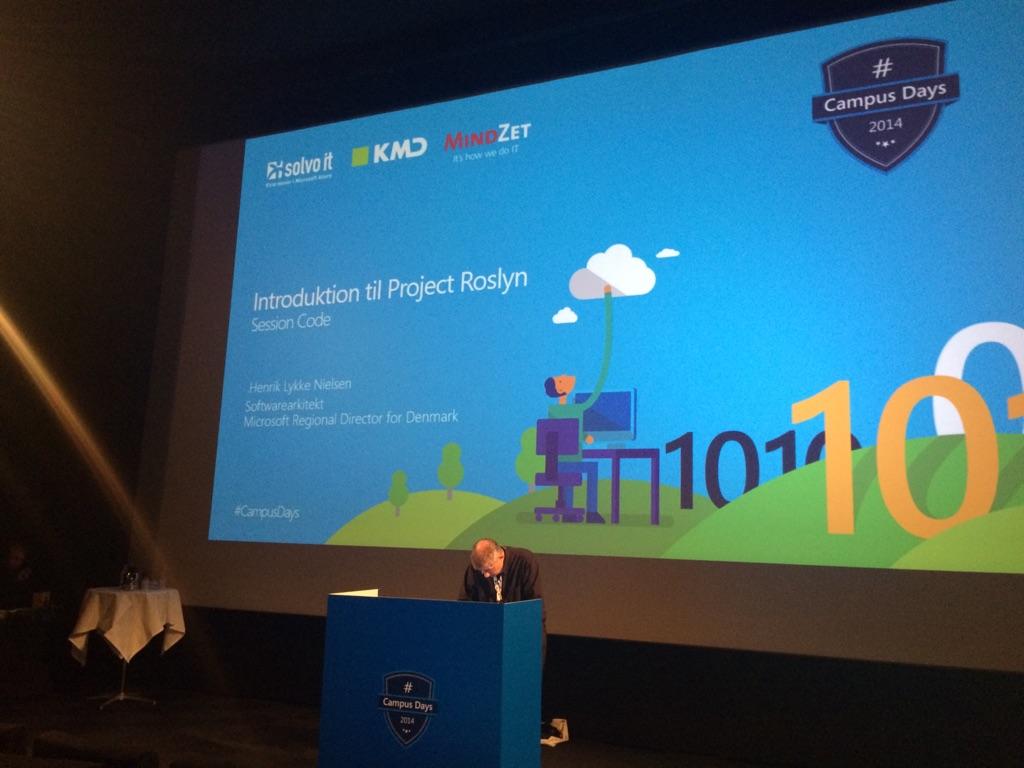 Anders Lybecker gave a nice session on Azure Search full-text searching. Having experience with Elastic Search I think Azure’s ‘we’ll do the configuration for you’-approach is something that might trigger a lot of newcomers into using these search engines. It is very straightforward to install and configure Elastic Search, but if you are new to full-text searching the Azure Search approach is very appealing.

Mogens Heller Grabe held his famous talk on CQRS and event sourcing. I’ve heard the talk before, but Mogens did some very neat things using Azure Service Bus Relay Service, which I’ve never seen before. With the relay service you can create hybrid applications that can run both on-promise and in the cloud, and still use the same infrastructure. The relay service makes it possible to by-pass firewall restrictions. 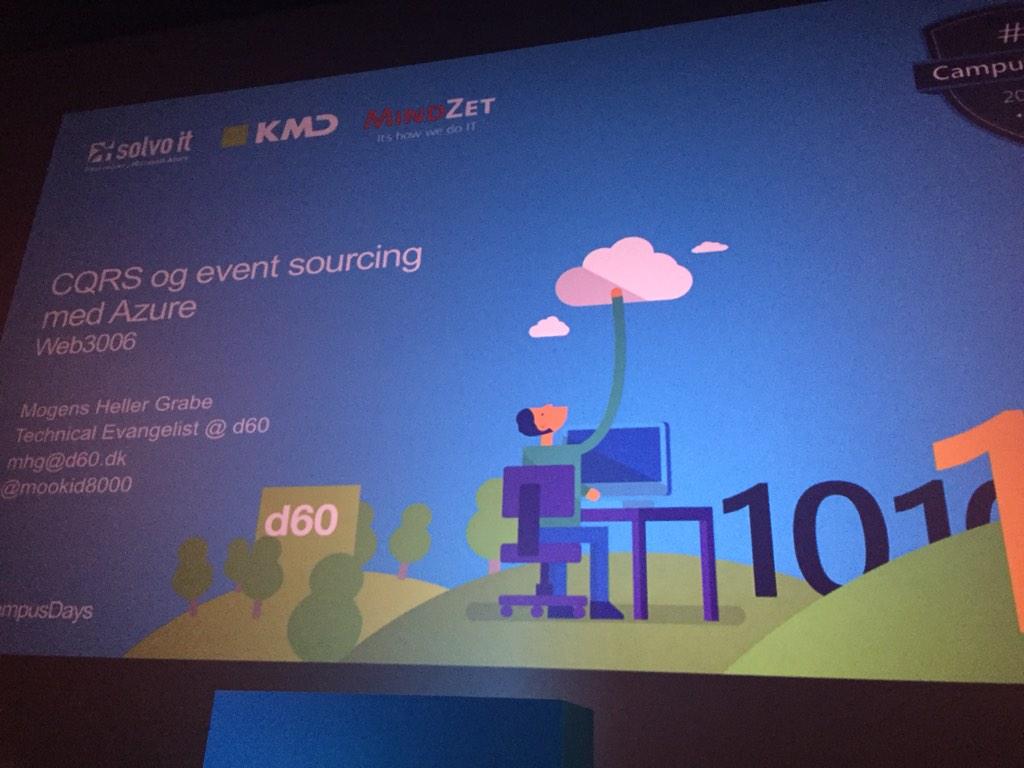 On the second day, I went to see Morten Christensen do a session on Azure Management Libraries. In essence the Azure Management Libraries is bunch of CLI tools for automating everything around managing your Azure instances. Being a CLI and automation fan-boy I found these tools very appealing, and something that I need to have in my toolbox. Morten did somehow mistime his talk, and did the session in 30 minutes, despite it being a 75 minutes slot. My own experience is that it is very difficult to hit the exact time, but a 45 minutes off is way too much. 30 minutes into a session slot, doesn’t give the attendees a chance to find different session, since it’s difficult catch up for missing 30 minutes.

In the next slot, I attended Christian Horsdal doing a talk on modulary web applications using OWIN/Katana. I’ve used OWIN for OAuth2 before, but Christian showed off some nice Func-of-Func examples, that really illustrated the OWIN pipeline workflow. Good talk, with a nice flow and good balance between slides and code.

Later I had the pleasure of enjoying Christian Dalager’s talk on Azure WebJobs. I’ve never had any scenario for WebJobs, but they are pretty cool. So, basically you can write scripts in your favorite script language, although scriptcs is still missing, and make your Azure Website make use of it to do some background job. Christian demoed a small Twitter-like app for sending emotional tweets, or emotweets. He showed how the site would benefit from the use of WebJobs. I really liked Christian’s presentation, both informative and funny. 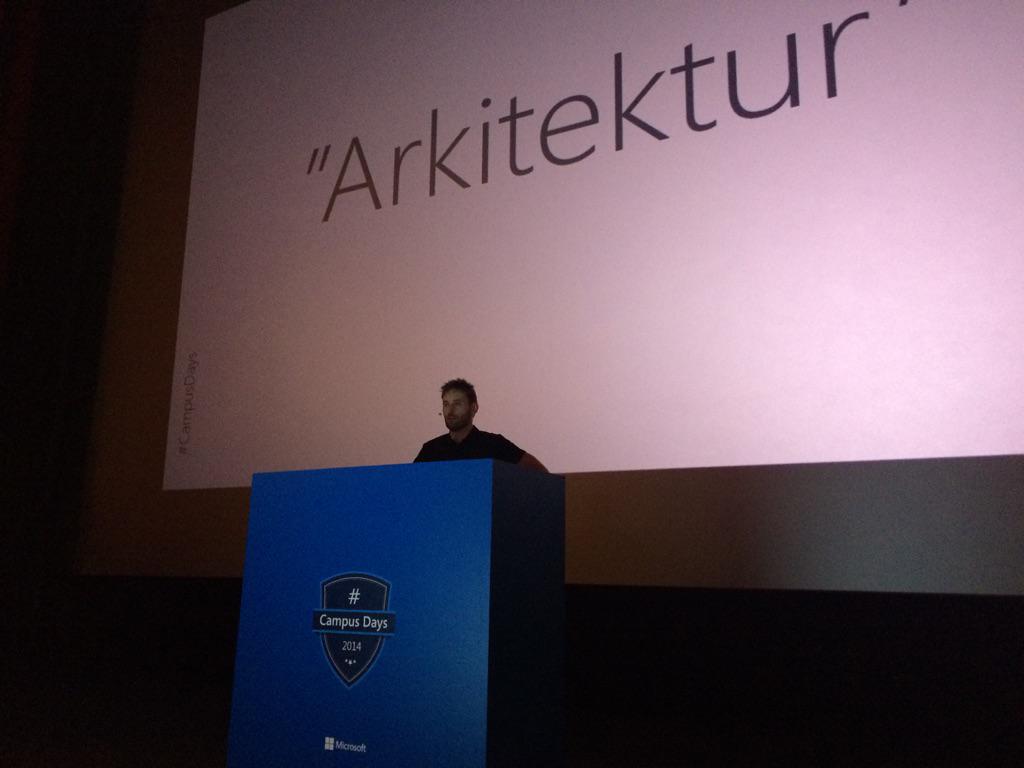 The last session on the second day of Campus Days, was on web security. Anders Skovsgaard, the founder and kingpin behind Hackavoid, did a really awesome session on and about web security. Probably the best of the conference, so much take-away. He did a combine theory and practice session, where he show some of the most utilized web site hacker methods, both with examples of how to use them and how to prevent them. This is a very smart and bright guy, who has a lot experience in this field. He has done security work for both Google and Twitter.

On the third day, I stopped by Christian Holm Diget’s talk on patterns in single-page applications. I probably had other expectations to that talk, than what Christian really wanted to show. From the title and the abstract, I would have expected a talk on general patterns in single-page applications, but Christian showed us how AngularJS and other frameworks are composed, and that they share similarities. One of points, Christian emphasized was that, you, as a developer, should not be too religious about choice of framework, but rather focus on design principles and the domain. That’s true. I would therefore have expected, a clean talk without any, or maybe very little, mentions of libraries and frameworks. As a former colleague, I can tell that Christian is a great developer, both on .Net and web, and can give us all a lesson on single-page applications, but I just had the wrong expectations to this talk.

In my second session on the third day, I attended Lasse Skytte Knudsen in his talk about migrating from Azure Federation to Azure Elastic Scale. This talk really didn’t get. I was probably not the target audience. It was one of those sessions slots, where it was difficult to pick a session.

The ASP.NET vNext has really been buzzed and hyped recently, so it really made good sense to attend a talk about this topic. Stig Irming-Pedersen gave us a great introduction by showing off some of the most important aspects. This talk was indeed one of the highlights of the conference. I’m not going to use this post on explaining details about ASP.NET vNext, this can be read elsewhere, but I would use this space to credit Stig for a great talk.

My last session of Campus Days 2014, was about coded UI tests and cloud-based load tests. I’ve previously used coded UI tests, and was rather pleased to see how much has progressed since then. Peter Lindberg gave a brief introduction to the latest in coded UI test with Visual Studio. Showed a nice demo with manually recording test scenarios, progressed and showed how to automate them. Finally, maybe a bit overdue, but nonetheless very relevant, cloud-based load tests were used to load test the application with the same test scenario. These cloud-based load tests has very promising aspects. You can assign a number of virtual users, depending on your subscription, and make them use your application. Very clever. 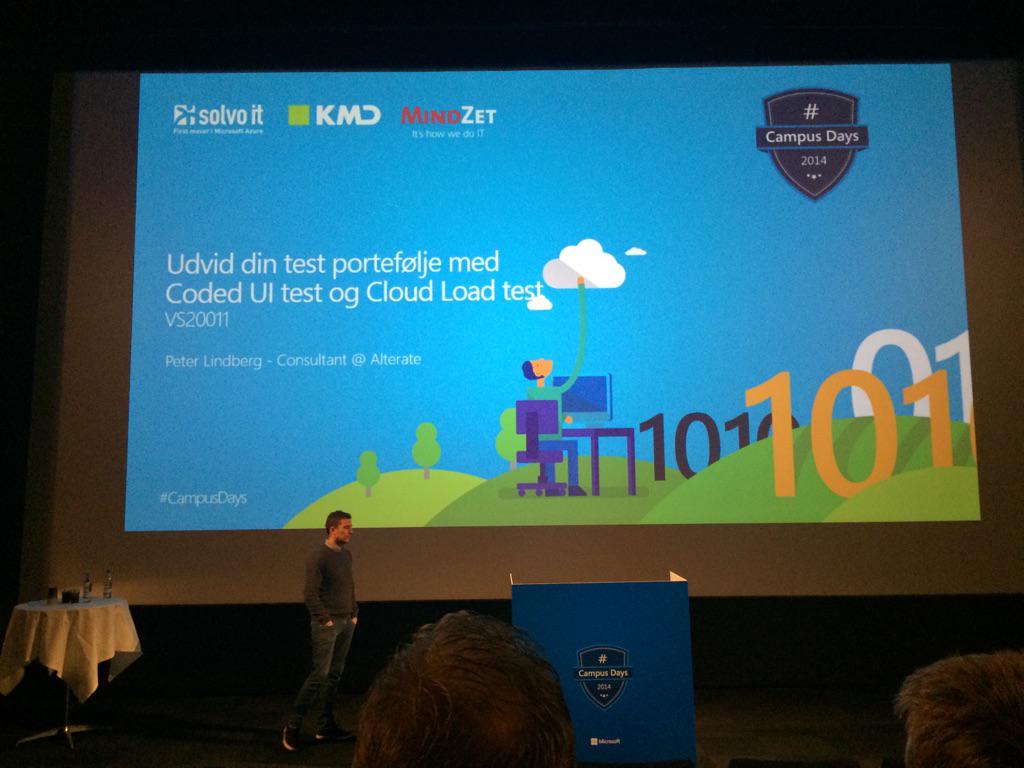 The Cinemaxx movie theater is a great venue for hosting a conference. Great audio, great seats and awesome displays. But, and there is usually a but. Why does a movie theater with 14 screens on three floors, only have toilets on the lower floor. The staffing was adequate and kind. All in all, the positives by far outnumbers the negatives with regard to the venue.

Catering covers all kinds of food, beverages and snacks provided by the host or sponsors. And this is by far, my most critical point, it was bad. Compared to other Microsoft hosted conferences I’ve attended, the catering of Campus Days 2014 was particularly bad. On the first day, my session got delayed due to some technical issues, so all there was left was this: 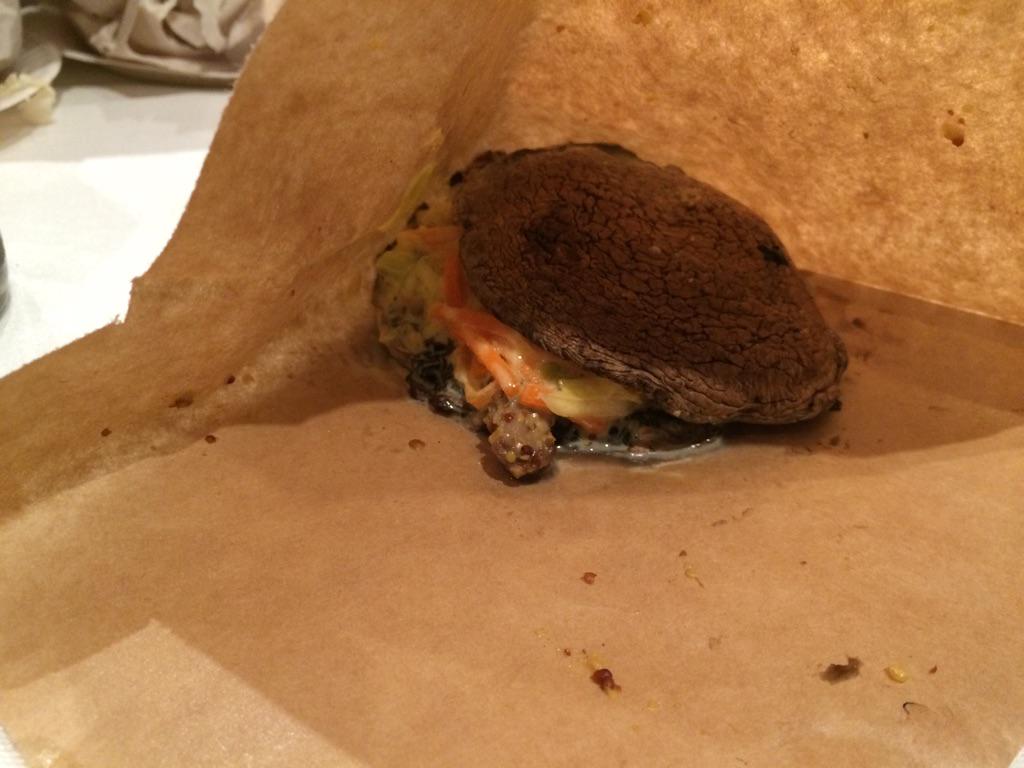 I’ve got a lot of replies on Twitter, asking what this is. And no, it is not a dead or squashed turtle. It should be something Paleo-thingy, with Portobello mushrooms acting as bread around some veggies and meat. I didn’t taste it, so I’m willing to take the punches. But Microsoft, this is an IT conference, throw us some delicious sandwiches, and use the Paleo stuff in your own canteen.

On the second day, there were sandwiches, and great sandwiches. But, on the third day, we were back to the experimental kitchen. I ended up getting two rolls in ricepaper with a tiny piece of salmon, and a proportionally large amount of salad. They were very dry and tasteless. An alternative was wraps with pulled pork. I was thrilled, but again, so terribly disappointed. The tortilla wrap was replaced with cabbage leaves. Now that is blasphemy. Again, were did the good sandwiches from day 2 go? Some times the good alternatives were lacking in stock.

Breakfast was served in brown bags. Brown bags with a tiny piece of bread with a hard crust, some cheese, chocolate spread, and jam. The bread was nice and fresh, but why only a single piece. I got two bags, ending up with too much cheese and stuff, generating food-spill. And all garbage these brown bags generate was enormous.

Also at the social event on Wednesday night, a 1920s themed event with jazz and poker tables. It was well themed, loved the jazz, the entertainment, and drinks, but again the food failed. We had Budweiser, bad beer, and badly timed according to the 1920s theme, but ok, I could live with that. There were other options like a variety of craft beers, wine and drinks. The food was steaks and burgers. Unfortunately, the steaks was very rare, and served only with a fork. Although chopped, but in very large chunks, it just made the experience so bad. The burgers was ok, to the extend that they were difficult to handle and very juice. One thing to note about the Campus Days conference, is that there was not enough seats for everyone, so many meals is eaten standing.

This really turned out to be a large blog post, but I think the speakers, of which sessions I attended, deserves some feedback. I know they’ve spend hours preparing their talks. And also Microsoft for hosting the conference, might need some feedback from the trenches.

All in all a great event. The assembled group of speakers was great, although I could have wished for bigger speaker names which could have given the conference some international attendees as well.

An advise on the catering, find different supplier that knows their audience and were supplies last.